In July of 2012, Mary, Grace and I went on one of first family vacations with just the three of us. With some discounts from the paper, we headed down to Branson, which had been one of my favorite family vacation destinations as a kid.
We had a great time during the trip. We swam. We played putt-putt. We went shopping. And of course, we went to Silver Dollar City.
It was Mary's first time at the Ozark Mecca, but I'd probably been there 10 times in my youth. It was always a favorite of our family, so that's where we went for a lot of our vacations when I was growing up.
We hit several of my old favorites like the glass blowing demonstration, the candle dipping place and the Tater Patch, which mixes up a little piece of heaven called calico potatoes in a six-foot wide skillet.
My favorite part of the trip we found totally by accident. The Wallenda Family Circus was just finishing up their run at one of the theaters inside Silver Dollar City.
We had just seen a special on Nik Wallenda a month or so before and had watched him walk over Niagra Falls on a tight rope on TV so we were pretty stoked to see him perform. Plus the theatre was air conditioned and our 10-month-old princess was getting cranky.
The show was awesome, but the coolest part was getting to meet Nik after the show. We bought a picture of his famous walk over the falls and got an awesome photo of Mary and Grace with him. 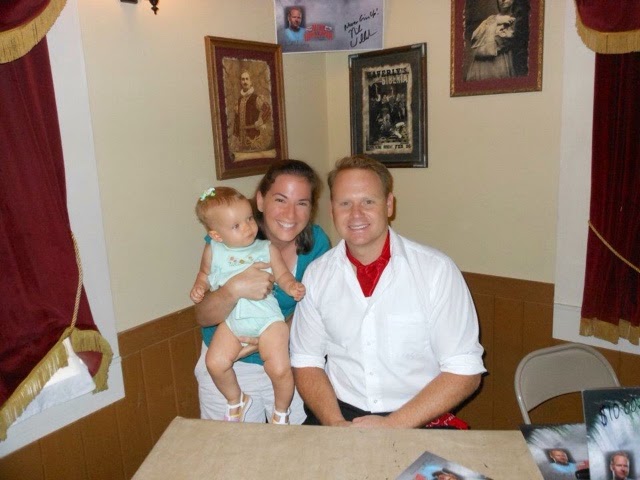 Just before we left, Nik signed the photo, making out the inscription to Grace. As we got back home, we put the photo in our spare bedroom, with promises of hanging it up soon.
I had pretty much forgot about it until a few months ago when I came across it while looking for something else.
As I read the inscription, I was floored. There in perfectly preserved black Sharpie was the following "Grace, Never Give Up! Nik Wallenda" 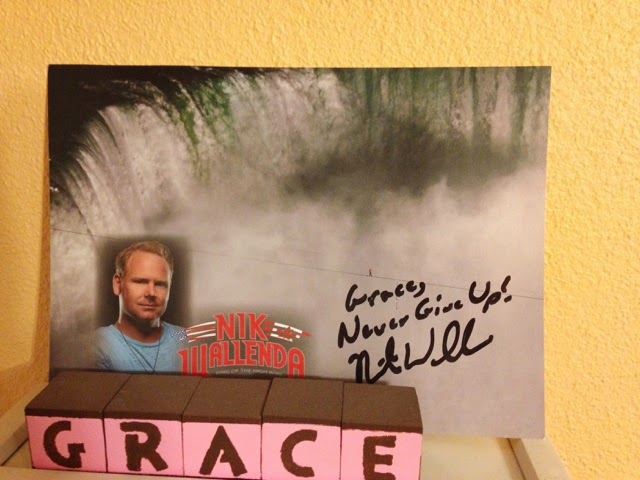 This was written when Grace was a perfectly normal little girl. There were no delays. There were no questions. There was no INAD.
But almost three years later, INAD is our reality. We continue to hold out hope for a miracle, for a cure or a treatment for this awful disease.
Since rediscovering the photo it has been perched on a shelf above Grace's bed. Nik Wallenda's words serve as a reminder to me to never give up regardless what stands in our way, whether it be a thousands of gallons of rushing water underneath a perilously thin wire or a rare and deadly genetic disease.
Mr. Wallenda will undoubtedly do more remarkable things in his career, but as far as I'm concerned, his words to Grace are the most remarkable thing he's ever done. Even if he doesn't know it.
Posted by agracefilledjourney at 8:56 PM