Back To School Blues

It’s been an emotional week in the Herschelman household as students get ready to go back to school.

While I have enjoyed seeing all the photos of the kids with their backpacks and school supplies, it’s also been a reminder that Grace isn’t starting school this year with all her friends.

If things in our life were “normal,” Grace would be starting third grade this fall at Beckemeyer Elementary School, a place where she found lots of love and laughter for two and a half years. We made the hard decision last fall to take Grace out of her classroom because she just didn’t have the stamina to stay, even for just two hours in the afternoon.

But for six years, I got to take a “first day of school” photo with Grace and celebrate in the joy school brought to her. 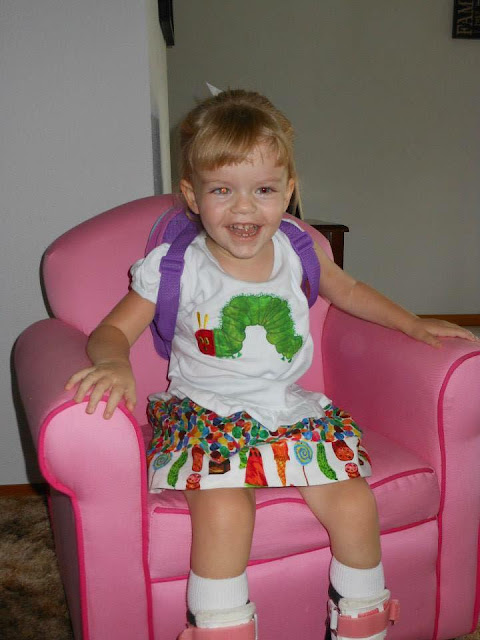 She started at our church’s preschool program with a full-time aide just before her third birthday. At the time, we knew Grace had some developmental delays, but we had no idea she would be diagnosed with INAD just three months later. She had her very first school program just after we found out she had INAD, and though I cried most of the way through it, I still remember her trying to sign the words to “Jesus Loves Me.” She also got to play the bells during her first Christmas program and play her drum when the kids got to bring instruments to school.

During her three years in preschool, Grace was lucky to have two really great aides in addition to her teachers. They helped her with art projects. In the beginning, she was able to help with some special crayons we bought, and the aide would mark the portions of the page Grace helped with. She has always loved reading and being read to, and just interacting with kids. 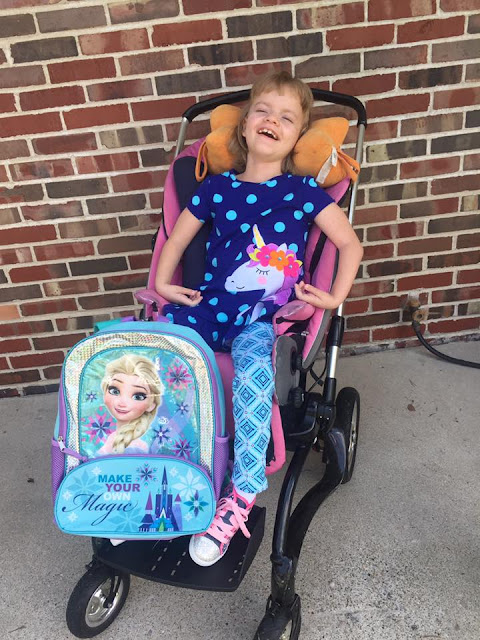 After her preschool years, Grace spent two and a half years at Beckemeyer. She went to school for two hours in the afternoon, and had time to socialize with her friends in kindergarten. Although Grace would never learn to read or write, she loved this one lamb puppet and reading Junie B. Jones books with her teacher.  We were very blessed that she had some amazing aides and teachers in kindergarten as well.

I think the thing that always amazed me the most was the way the kids interacted with her. When I would bring her into the classroom, everyone would say “Grace” and come over to see her. They found joy in their interactions with her, even though she couldn’t talk to them. They still found a way to connect. My teacher friends tell me that’s the mark of some really great teachers, and we were lucky to have some of the best.

It was a hard decision to pull Grace out of school, but as INAD progressed, it affected her hearing and her eyesight, making it harder for her to enjoy all the things that once made her smile. But it warms my heart to know she is still making a difference in the lives of so many of her peers.

So, my momma heart is breaking a little this week watching other moms send their kids off to a strange, new school year. But I will forever be grateful for everyone who made school such a joyful place for our Grace.

Posted by agracefilledjourney at 7:03 PM No comments:

We get by with a little (or a lot) of help from our friends.

Kyle and I are continually humbled and blessed by the goodwill shown to us throughout our community as Grace battles INAD. Friends and family bring meals or come to visit. Churches keep us on their prayer chains. Just before valentines day, a church in Litchfield brought us a bag full of cards, and Kyle and I enjoyed reading all the scriptures people picked out for us.


Last weekend was a very special show of love for our family. For the second time, dancers from Fusion Dance Center hosted the Feet of Grace benefit in honor of our beautiful Grace. They held a show full of special dance routines and raised money to help us take care of Grace. In addition, Grace’s first grade teacher at Beckemeyer and some of her school friends hosted a bake sale during the performance.

Since Grace got sick last December, we haven’t really been able to take her very many places, due to cold weather and rampant sickness. But that Sunday (Feb. 9) was a pretty afternoon and we made the short trek to the high school for the show, where they had saved us seats in the very front row. Although Grace slept through part of the production, Charley was enraptured by the dancers from the very first song. She leaned over to me and said, “this is wonderful.” Her attention span didn’t make it through the whole concert, but we all loved being there.

One of my favorite parts of the concert was when it was over. We knew some of the dancers and their families, and many stopped by to say hi. But several of the dancers we didn’t know came over to meet Grace. They wanted to tell her they were dancing for her and that they hoped she felt better soon. It always warms my heart to see kids interacting with Grace, and makes me know the world will be a better place someday because of wonderful kids like these.


It doesn’t seem like enough just to say thank you to everyone who helped raise over $1,400 for our family that day, but we will always be grateful to our friends who help us get by, that day and every day on this Grace-Filled Journey.
Posted by agracefilledjourney at 9:37 AM No comments:

Another Grace Game In The Books

It was a great day for the Lady Blues of Illinois College as they picked up a big 81-48 win over conference foe Beloit from Wisconsin. Hillsboro native Carly Cameron even picked up a double-double with ten points and ten rebounds in the win.

But while it was a great game for the senior on the court, it was what happened on the sidelines that made it truly special.

At Carly's suggestion, Coach Jennifer McCormick and the Lady Blues hosted a Grace game this afternoon in the Bruner Center at Illinois College to raise awareness for INAD and funding for research.  Carly and her friend, Lindsey Storm, both former Lady Hiltoppers who have always been some of our biggest supporters, came by over Christmas break to see the girls. Carly told us that she's been wanting to do a Grace game with her team since arriving at Illinois College, but it seems that the stars aligned for a game this January.

We told Carly that we thought a Saturday game might work best for us, and together, we picked Jan. 11, when both the men's and women's teams hosted Beloit. After Grace's second admission to the hospital last week, we weren't entirely sure we would be able to bring Grace, but we promised that Kyle and Charley would go for sure. Fortunately, Grace was discharged from the hospital on Tuesday and had a really good week at home, and we decided to make the trip together.

I don't know how many Grace games we have been to as a family in the last five years, but they will always be some of my favorite memories. That's why we really wanted to make this trip a special one. From basketball to baseball and softball to soccer, we have loved meeting players from all over and sharing Grace's story. Classified as an ultra-rare disease, sharing Grace's story helps us bring more awareness to this devastating disease. And the more people who know, the better.

That's why we were just thrilled when Carly told us she and her teammates wanted to host a Grace game this year. And even more exciting that some of our family made the trip with us. Although there was some snow in the forecast, we made our way the hour and a half to Jacksonville in plenty of time for the game.

When we arrived, we saw the team hung a huge BeatINAD banner in the gym. In addition, instead of collecting admission for both of today's games, the school accepted donations for the INADCure Foundation, and brought in nearly $500. We continue to be so humbled and honored by people's generosity on our journey.

As we made our way down to the gym, we got a big wave from Carly and Coach McCormick stopped by to meet us. Meanwhile, Kyle was interviewed by one of the local television stations about our story, which was another great way to raise awareness. And we enjoyed sitting with our families for the game.

Just before they announced the starting line-up, our family was invited to midcourt for a special presentation. Carly and fellow senior Grace Yaunches presented our Grace with a jersey signed by all the members of the Lady Blues. Even cooler, after the game, we found out that jersey belonged to another former Lady Hiltopper (Jaicie Halleman), who went on to play for the Lady Blues as well.

It was an awesome game, as the Lady Blues dominated from start to finish. We have always loved going to sporting events together, and this one was so much fun. After the game, we had a chance to meet the team for a group photo, and Kyle told them a little more about Grace's story. We were so touched to see that the players had purple ribbons tied in their shoelaces as well.

She may only be eight years old, but our little Grace has touched so many lives in her eight years, and we are so proud of her for continuing to be an inspiration to so many. Special thanks to Carly and her teammates for helping us raise awareness and helping us make another really great memory on this Grace-Filled Journey.
Posted by agracefilledjourney at 9:40 PM No comments: