With A Little Help From Our Friends

When Kyle and I were planning our wedding reception, I knew right off that I wanted the bridal party dance to be one of my dad's favorite song's Joe Cocker's "I Get By With a Little Help From My Friends." Because quite simply, the journey is made easier and better with a little help from those closest to us.

In this "Grace-Filled Journey," we have made LOTS of new friends who have joined us along the way. Maybe it was a kind word or a text, or maybe it was a new book for Grace. Maybe it was even a new and creative way to raise money for the INAD research study. While we have featured many of these events in our blog throughout the year, here's a few fundraisers and donations from this fall and winter.  We are SO blessed by those of you who continue to raise money for this study.


One September night this fall, school board member and Junior Football League volunteer Ron Anglin asked us if we would bring Grace to the last home JFL game of the season, when the Panthers hosted Hillsboro on a Saturday afternoon. He said they had a donation for us.

We were very excited to bring Grace to the game, and they presented us with a $500 check between the seventh and eighth grade games. Throughout the season, they held a raffle with Domino's pizza, and all the proceeds went to the INAD study.

Mid-State Officials Association
Right in line with Friday night football, one of our favorite high school referees, Louis Lang, called Kyle and asked if we could come early to the final high school home game of the season, because local officials had a donation for us.


During October, local officials wore pink in honor of breast cancer awareness month. They decided to donate a portion of their pay to the INAD research study and the Montgomery County Cancer Association in honor of WSMI personality Terry Todt. Lang praised our coverage as well as the radio station's of local sports in this area, and said the referees were proud to support such great causes.

American Girl Doll Raffle
Football fans were busy this year with INAD events, and this time it was an American Girl doll raffle at the Hillsboro and Nokomis football games.

Earlier this summer, Gena Lewey called to tell me that she and her sister, Andrea Ruppert, had bought the American Girl Doll of the Year Grace, for our Grace. But it just so happened that Grace won the raffle by the queens in July. When Gena read about that in the paper, she called to tell me she had another idea.

She and her sister bought another doll and they raffled off each at the final home football game in Hillsboro and Litchfield in memory of their dad, Brooks E. Moreland.  Grace and I even got to go to one of the games in Hillsboro and say hi, and to thank them for their efforts. The dolls were won by Jenna VanOstran and Sarah Eller.

Shortly after the end of football season, Gena called to ask me if they could stop by and bring their donation, which turned out to be $1,000. Talk about Amazing Grace.

USMNT Soccer Game
In keeping with the sports theme (because that's how we roll . . .), Kyle worked on a raffle for three tickets to the United States men's national team soccer game at Busch Stadium in November. They were donated by one of Grace's physical therapists, Dr. John Mekala in Hillsboro. 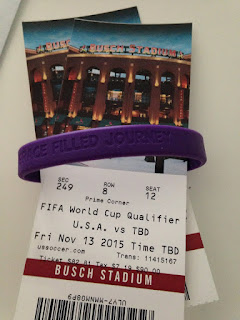 With a little help from 2015 Miss Chamber of Commerce Natalie Elliott, she and Kyle started selling the tickets at the Grace race in September. Then Kyle did a story for the paper and sold some tickets at area high school soccer games. In the end, over 150 tickets were sold, and the raffle raised over $300 for the study. The best part, one of my brother Johnny's classmates, Jake Wilkinson, won the raffle, and couldn't wait to take his family to the game.

Lincolnwood Lancer Basketball
As fall moved into winter, Kyle began getting sports previews ready for basketball season. He was working on a preview night story for his alma mater, Lincolnwood, when he learned they were donating to the INAD study.

Typically, admission to the preview night is a donation of shampoo or Gatorade to the team. This year, they added a donation to the INAD study, and raised more than $300. I was busy that night, but Kyle and Grace got to go and had so much fun cheering for the team and visiting with Grace's favorite cheerleaders, Kayley and Kensey.

Litchfield FCCLA
I was sitting at a school board meeting this fall, and the Student Council President reported that the FCCLA was raising money for the Herschelman family this year by doing a variety of fundraisers and working concession stands at the ball games.  I turned to ask one of the administrators if I had heard right. She said I had, and I just smiled.

Shortly thereafter, I got an e-mail from their instructor, Mrs. Garrison, asked if we would be willing to bring Grace to one of their meetings, and we happily agreed. It wasn't a night that Kyle could join us, but Grace and I had such a good time sharing our story with the students and answering their questions. They even gave Grace a whole bag full of goodies, including two new Minnie Mouse stuff animals she can hold, a couple of board books and some DVDs to watch in the van on the way to physical therapy. They also gave us a check for $100 for the INAD study and $100 for Grace. We were so honored to come that night and meet the kids.

At the last school board meeting I attended, I learned they sold candy canes at Christmas for another fundraiser for Grace.  They adopted us for the whole year!

Litchfield Student Council
You'll read more about this one in the coming weeks and months, but the Litchfield High School Student Council is selling temporary license plates featuring "A Grace-Filled Journey" logo. We are SO excited for this opportunity to help raise more awareness for INAD too.

The plates are $30, and will be legal to put on Illinois vehicles from the end of February through April. On our two vehicles, we got BEAT and INAD.  They will have a presentation of the donation to us at the county baseball tournament later this spring.  You won't want to miss out on this one!

The Vinyl Guy
And speaking of vehicles, The Vinyl Guy in Raymond has made custom "A Grace-Filled Journey" vinyl decals for your vehicle.  We are fortunate to have one for each vehicle, and so far they have raised over $300 for the study. The decals are $10, and are available at The Journal-News office in Hillsboro.

As a special treat, we found out after Alexis Wernsing died that she had ordered a decal, and her mom and dad brought it to us to have. Even better, it has written Jeremiah 29:11 on it, which was her favorite scripture. It's become very special to us too.

Trader Cookbooks
Shortly after we returned from Hawaii this summer, we found out that a local resident had put together a cookbook and was giving part of the proceeds to the INAD study.  Kathy Trader said she had compiled over 400 of her family's favorite recipes. It was more reasonable to order 200 copies of the book, than just enough for her family, so she ordered extras.  We bought one and asked her to autograph it for Grace.

Over the weekend, she and her husband sold the cookbooks at a Christmas Market vendor event, along with some Christmas ornaments he decorated to say "A Grace-Filled Journey." We got a purple one for our tree. Kathy brought us a donation of $350 for the study. We were so surprised! She said she still has a few cookbooks if anyone is interested, and we love ours!

Other Donations
I know I will probably miss some, but we just want to say THANK YOU to everyone who has donated to the study.  This morning, Grace and I went to the courthouse (and not because Kyle was arrested), but the Circuit Clerk's office had a $160 donation for us. They hosted a jeans day every Friday throughout the year, and employees could make a donation to wear jeans on that day. I'd probably be in trouble if I had to pay every time I wore jeans to work, but we sure are grateful for the donation to the INAD study.

And just this week, our friends Jen and Adrian Baker of Diamond Imprints told us they were making a donation to the study from their business. Each year, they donate a portion of the proceeds to a charity, and this year they are giving half to Special Olympics and half to INAD research. How awesome is that!

Although we took $70,000 just three weeks ago to Dr. Kotzbauer, we already have $4,000 again building up in that account, and we continue to learn of more fundraisers all the time. Please know what a difference this makes in the families of all the kids with INAD, and we are SO grateful to "Get By with a Little Help From Our Friends."

MLH
Posted by agracefilledjourney at 4:51 PM