A Bushel And A Peck

What a beautiful day for a trip to the apple orchard.

This week, Kyle and I took a day off of work to join Grace and her classmates on a field trip to Broom's Orchard in Carlinville.

For once, we were on time to school, meeting several of the families at church before making our way to the orchard.  When we arrived, Grace was really excited to see her friends from both the morning and afternoon classes. Many of the kids in this year's afternoon class were in her class last year.

The morning class got to take the tour first while the afternoon class played on the playground.  One of the employees started the tour at a photo of Johnny Appleseed and told the students about how he traveled the country planting apple seeds so that we would all be able to enjoy apples. She said the orchard there has 2,000 apple trees with more than 20 varieties of the fruit. They also have pears, plums and of course, pumpkins. 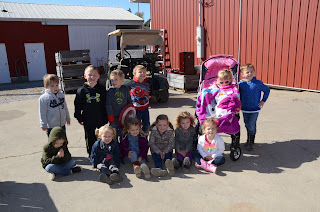 The first stop on the tour explained how the workers pick apples using a tall ladder to get up in the trees. She showed the kids the bag they use to collect the apples and how they just undo the bottom when it gets full and put the apples into a huge bin, which is later picked up by a tractor.

Next, we saw how they sorted the apples from the big bins. Workers put the good apples into bags or boxes to sell to customers. They put the apples with bad spots into another box, and those apples are later turned into delicious apple cider.  We even stopped to get some before we left.

The kids also got to see where they make apple cider. Our tour guide explained how the apples are ground up and then piped into the building, where they are pressed, pasteurized and turned into cider.  She even let the kids touch the remounts of the apple parts not used in the cider, which they thought was really neat.

Our final stop before apple picking was a cold one. The kids got to check out the refrigerator where they keep the apples before they are sorted. She said on hot summer days that's a favorite spot for employees to work.

As the teachers got ready to pass out the apple picking bags, we stopped for a class photo.  Kyle parked Grace right by some of her classmates, and she just smiled.  They are all very sweet to talk to her, and she just loves it.

Then it was off to mommy's favorite part, picking apples! Grace's class got to pick a quarter peck of Fuji apples. I helped her with part and her daddy helped her pick a few. On Sunday in church, Pastor Joy talked about how her dad used to take her daughters to pick apples and he always managed to find the shiny ones just for his granddaughters. It would be years before they would realize he was just shining up the apples on his shirt, so Kyle made sure to get Grace her own shiny apple while we were there.

After the apple picking, it was the afternoon class's turn for a tour, and Grace's class got to play on the playground equipment.  Grace and I went over to say hi to the baby goats, which was fun. They we sat on some hay bales and watched the kids play.  Her friend, Mia, even brought her a dandelion flower.

After a picnic lunch with the class, it was time to head for home. And after all that fun, Grace was asleep in the van before we even left Carlinville. It was such a special day to celebrate fall with Grace's friends, and I hope we even get to make some apple pies with the fruit that she picked.

MLH
Posted by agracefilledjourney at 3:07 PM